Those of you that have been watching goggle-eyed at all the tricks that David Attenborough’s Performing Fish can do, you may be interested in the story of one of the sea’s major pollution incidents. This dates back to Greece in the summer of 2012.

Our holiday aspirations were set to increase that particular year because we were going to have considerably more money in the ‘per-head’ budget. This was due to our eldest son going on a school ‘world challenge’ for most of August. He and his classmates were going off to Tanzania to do noble things, like teaching the natives how to swear at an X-Box.

As we had a bit more money, the usual prospect of shivering in a Eurocamp tent for two weeks was rapidly dismissed by certain members of our family. These were the members of the family that fail to see the benefits of driving for many hours on open French roads, grocery shopping for interesting salad items in the local Intermarche or sneaking off for the day, on your own, to visit a nice little provincial art gallery.

Our enhanced budget would even stretch to using one of those so-called ‘aeroplanes’, thus we could look further afield than the muddy campsites of Northern Europe. However, we’d never really done package holidays before so we didn’t know our Tenerifeys from our Shagalufs.

Rather than just spin a bottle on a map of the Mediterranean and end up sitting around a packed pool with lobster-coloured Brits in Chelsea shirts, we allowed our youngest son to make the decision. 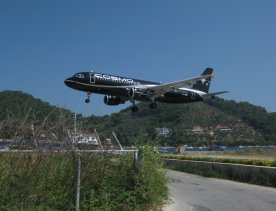 I was a bit concerned about this, but I was reassured by our 14 year old who said that, should the pilot have any difficulties, he could help out as he had landed at the airport many times on his computer…and sometimes even successfully.

And jolly dangerous Skiathos Airport is too. Should you be in any doubt there is a sign at the end of the runway that tells you so. Another rusting sign gives the advice that getting too close to the aircraft may cause injury or death. This is because the runway is so short that you can stand a few metres away from the planes as they take off. Fortunately the Greeks can’t really afford proper Health & Safety, so there is nobody there to stop your fun when the jets wind up their engines for take-off and knock you off your feet by blasting supercharged air and several kilos of grit straight at you.

Apart from airport amusements, Skiathos does have other tourist attractions. It was one of the locations for the film ‘Mama Mia’. Even the doctor we visited, in order to have large amounts of runway grit syringed from our son’s ears, had a signed picture of Pierce Brosnan on his wall.

An enterprising British family run an open-air cinema in Skiathos where they show ‘Mamma Mia’ three times a week. There’s beer, popcorn and audience interaction too. Well, there’s interaction from some of the audience. When asked to ‘get up and dance’ the British tend to just shuffle uncomfortably in their seats and pretend one of their knees hurts. 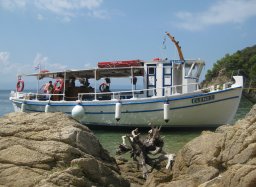 You can also take a pleasure cruise around the island for a day. As most of the holiday budget had been frittered on getting to Skiathos in the first place, we went for the cheapest boat on offer and signed up for the good ship ‘Eleni’. The boat was skippered by two brothers who looked like a pair of Ramones. However, they were very hospitable and I would like to take this opportunity to apologise to them for the enormity of what I left in the boat’s toilet. I’m sorry. The flushing procedure eluded me…if indeed there was one.

I presume it finally made its way out to sea as I’m sure I saw a whale choking on something very similar on Attenborough’s telly programme the other night.

See more of my attempts to foul the planet by clicking here.