My first visit to Cologne was in April 1975 when I was thirteen and on a school trip to Germany.  Unfortunately I have only one photograph of this visit which is a picture of some school chums in front of Cologne Cathedral (see main pic).

However, I can’t have been that ‘chummy’ with them as I can’t remember any of their names. They may well have been from a totally different school, or even a totally different country. They are so unknown to me that I have a theory that they sneakily removed my camera from my Adidas bag, took a picture of themselves and then quickly put it back.

Thus I only got to know them when I returned home and got the pictures back from the chemist. I suppose I should be grateful for small mercies, as this this was in the days before the gag had fully evolved to the point of also stealing the victim’s toothbrush. Imagine the joy of coming back from a holiday, with your dental hygiene fully maintained, and then viewing a picture of your toothbrush handle protruding from the camera thief’s rectum.

One thing is very memorable from the picture though, and that is the miserable weather. The sky is laden with dark and evil looking clouds and I remember it rained for most of the time I was there. It was pretty much the same when I visited more recently. In fact, I’m fairly sure it was exactly the same spiteful clouds that had been patiently waiting for the day I would come back to Cologne. It did indeed feel like they had saved up forty years’ worth of rain just for me.

Cologne Cathedral was the tallest building in the world for a few years, after the twin spires were finished. I presume this was an attempt by the locals to pierce through those stubborn clouds, just so they could see what a piece of blue sky actually looked like.

When I say it was the tallest building in the world for ‘a few years’ I should point out that this wasn’t for a few years in the thirteenth century when all of Europe was busy building tall gothic cathedrals. It was a much more recent ‘few years’ in the 1880s, and it was the Eifel Tower that surpassed it.

Most unsuspecting tourists think they are looking at a supreme feat of high-rise gothic architecture but the spires were actually added by a group of enthusiastic Victorians with a fetish for the all things tall and pointy. This was after they’d found the medieval architect’s plans and realised that the cathedral had never been properly finished. No doubt they also spotted the potential for the tourism trade as it is now Germany’s most visited landmark.

You could say it is a bit of a charade of a façade (My god that was clever). 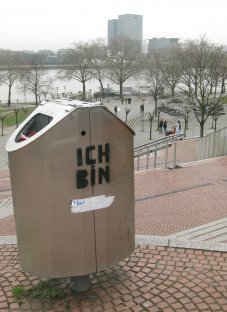 As well as rain (water), the River Rhine (more water) and Kölsch (beer in small glasses that tastes like water) Cologne is also famous for another type of water, the weak and insipid perfume Eau de Cologne. I don’t know why it is named in French, although it probably sounds more saleable than ‘Wasser von Koln’. The latter sounding more like somebody that should have been in the dock at Nuremburg.

There are competing brands that lay claim to being the original Eau de Cologne. Whilst this isn’t a turf-war that has resulted in as many stabbings as the Glasgow Ice Cream Wars, there are still plenty of marketing sabres being rattled in the shape of fancy branded shops with ‘we were first’ advertising.

Despite all these high-level branding efforts apparently most Russian tourists still buy it to drink. This is because it is a lot cheaper than vodka and it stops your breath smelling of cabbage.

If you do find yourself being persistently rained upon in Cologne then a good place to shelter, until the builders have finished your ark, is the Museum Ludwig. This is a well designed art gallery with a wonderful collection and very friendly staff.

It is somewhat different to the nearby city of Bonn’s main art gallery. This is called The Kunst Museum. It isn’t interesting, well-curated or in the least bit friendly. Indeed the name of the gallery may well allude to the severely officious staff that made me feel as welcome as someone that had beaten them in two world wars and one world cup, as I pointed out before being taken out the back for a good kicking.