Amiens claims to have been badly damaged in both World Wars and that is why a lot of the old buildings are no longer there. However, the ‘miraculous’ sparing of the tourist-magnetic Gothic cathedral may reveal a darker truth.

My own theory is that there was a more recent covert operation to surreptitiously remove all the quaint little medieval buildings one by one. I reckon they demolished them at the rate of one a night whilst everyone was asleep. Over a couple of months, and before anyone had noticed, they’d managed to transform Amiens into Croydon i.e. a vacuous place with nothing but coffee, phone, sportswear and betting shops.

So now Amiens is a bustling shopping hub with little charm, unless you are a caffeine-addicted text-junky gambler with a penchant for labels being worn on the outside of your inflammable tracksuit bottoms. Making a French city into one huge shopping-mall is all well and good, but if you are visiting from the UK you’ll find that your meek and subservient English pound will currently buy you sod-all when it locks horns with the mighty Euro. At the latest exchange rate I was able to buy only a postcard, a croissant and an onion for £523. And that was after haggling over the onion. 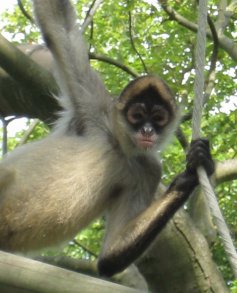 Having said that, there is a very nice zoo in Amiens where I was able to negotiate with a gibbon over a banana. The banana was a snip at only £68. Also included in your entrance price are amusing penguins and smelly elephants.

Rather than banana-trading with streetwise gibbons, a much more profitable time with animals can be found at Amiens Hippodrome. This is a race track for horses, not hippopotami. They don’t race hippos any more, that was banned many years ago along with mole-teasing and weasel-sharpening.

As well as seeing which horse can run the fastest, as you would expect at the races, they also engage in a continental oddity called ‘trotting’. Trotting is where the jockey sits in a little chariot right behind the horse’s bum. This can be mighty unpleasant if the horse suddenly slams on its brakes. There’s a French charity that exists to provide mental-health support to jockeys that have been traumatised by having seen far too much of the inside of a horse’s rectum.

In ‘trotting’ the horses have to run in a certain way, i.e. a trot, and they are not allowed to break into an all-out sprint. To ensure fair play there is a mini-bus full of referees that follow the horses around to make sure they trot properly and they aren’t tempted into a sneaky gallop. They also watch out for Ben-Hur type blades coming out of the chariot wheels.

On the evening I visited the Hippodrome I was quite clever with my investments and I managed to make a profit of two Euros on my bets. This may seem like a small amount but once I got home, and exchanged my money into English pounds, this was enough to buy a three-bedroom house in Chelsea.