Luxor Travel Guide: I don’t think I could ever have been an Egyptologist. Indeed, over the years, I’ve probably gained the more relevant experience to be a gynaecologist. However, even without specialist knowledge, I think I can understand why the desolate, arid and unpopulated west bank of the Nile became the burial ground of the pharaohs. This is the area that is now called ‘The Valley of The Kings’.

This deserted west bank was a complete contrast to the hustle and bustle of the city of Luxor on the opposite east bank (or Thebes, the capital of Egypt, as it was back then). Considering how much the population revered their pharaohs, you would think they would have buried them closer at hand. Then at least they could place a few flowers on their graves now and again, even if petrol stations hadn’t been invented to buy them from.

So instead of a local funeral, followed by some limp sandwiches and a barrel of warm Tetleys, they took the body all the way across to the other side of the river. They had prepared for this big day however, under the watchful eye of the pharaoh himself, by spending years digging out and decorating his fancy new tomb. Once the pharaoh repaid their hard work, by doing the decent thing and popping his clogs, they placed the carefully wrapped body in multiple stone sarcophagi and then secretly concealed the entrance to the tomb for evermore.

This was what the pharaohs’ wanted apparently, and now I think I know why.

Luxor Travel Guide: Imagine you a wealthy pharaoh (or a considerably less wealthy tourist trying to do Egypt on a budget) and you fancy going out for a walk to buy a couple of bananas for lunch. This may be because your tummy has been a bit dodgy and you want a bit of fibre down there to solidify what’s been going-on.

So you put on your robes and imperial crown (or Grimsby Town T-shirt and green floppy hat) and step outside of your palace (or The Lotus Hotel in downtown Luxor) and go out onto the street. 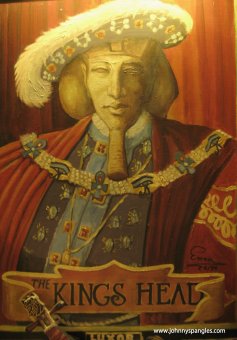 So, after all this pestering, you give up on the idea of a couple of healthy bananas and scuttle back into the security of your palace’s (hotel’s) pool-side bar for an ostrich sandwich with lark’s tongues on the side (or burger and chips). Which just makes your diarrhoea even worse, by the way.

I can understand why the Egyptians are desperate for money as the economy has taken a nosedive since the revolution. There are terrorist threats and regular demonstrations in Tahir Square. A lot of it is scaremongering by the press, but the tourists have stayed away in droves. Whereas there were ten million a year coming to Egypt ten years ago, this has now plummeted to one million. I presumed that this is why the few remaining tourists that do go (i.e. me) are being harangued for money on such an unprecedented scale, but I was wrong.

After doing a bit of research it appears that aggressively hassling anyone that might have any money on them has been going on for centuries in Egypt, and the Egyptian universities even offer degrees in it.

So if I was a pharaoh, and I was looking forward to a cushy and peaceful after-life, I’d make damned sure I was going to enjoy it as far away as possible from the persistent tat-pedlars on the streets of Luxor.

And I’d make sure they buried me with some bananas too.