I think I met Damien Hirst once, he was messing around with a video camera at a Sex Pistols concert some years ago. Tracy Emin was definitely there, I had a chat with her along the drunken lines of ‘Are you Tracey Emin?’ and ‘Can I have your autograph?’ This was in the days before I’d have taken a selfie, although we did have mobile phones that were powered by car batteries on trollies. Who would have thought the day would come that we could take pictures on them and, unbelievably, without having to take the phone to the chemist to get them developed.

She was with a little fat bloke who in hindsight looked a bit like Damien Hirst, although at the time Tracey was much more recognisable for having being pissed on national TV. So I ignored him. As I say, it may well have not been him but whoever he was, he was definitely with our Trace and they did used to hang around together. Time plays tricks on you and my mind does have a habit of moulding ‘half-baked memory’ into ‘it actually happened’. My solicitor pointed this out to me when I went after some Jimmy Saville compo after seeing him drive by in his roller when I was living in Leeds.

So many years later in Venice I am face to face with Damien Hirst once again, possibly. This time he is there as a statue pretending to be an ancient art collector called Cif Amotan II. This is an anagram by the way, which took me some time to work out. It could be ‘I am a fiction’ however if you take off the II it is ‘Fat Monica’. I assume the latter is the correct one and it may indeed be an alter-ego, with him being on the chubby side and moving in the same circles as transvestite potter Grayson Perry.

So the premise of the show is that this ancient collector’s treasure ship sank in the Indian Ocean thousands of years ago and Damien has privately funded a ten-year excavation of all the artefacts from the seabed. I suppose such philanthropic largesse is not beyond the bounds of possibility, especially if you can charge Charles Saatchi umpty-two million for a pickled shark.

There is a film showing you the divers uncovering the artworks and bringing them to the surface. This artfully contrived film is very convincing and I was nearly fooled, it was only when I spotted a sign in the background that said ‘Croydon Leisure Centre – No Jumping, No Urinating, No Heavy Petting’ that I began to have my doubts. 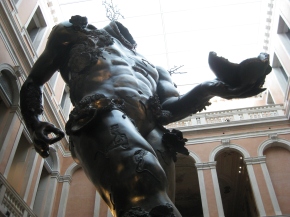 The exhibition is across two large venues in Venice and comprises many pieces crafted in fine materials. These range from small gold coins to a huge coral encrusted statue of a devil that stands around 20 metres high. The devil’s penis alone is the height of a man. For those if you that are particularly interested in large penises (peni?) it is uncut and black. However, if you are fussy and take your hygiene seriously, it does have barnacles and worm-casts on it.

So I guess what you have to ask yourself is; is it art, and more to the point what did it all cost?  As to the latter, the show was ten years in the making and probably cost many millions. However, if it is of any consolation to you, as you try not to break into your two remaining ten Euro notes despite gagging for a bottle of overpriced water at Venice airport, I’m sure Damien will be flogging them off at a huge profit after the show. There is a simple formula that the contemporary art world works on which is ‘cost = many millions, sale = many, many millions, thus profit = many millions’.

This formula works well as long as the contemporary artist is alive and capable of self-promotion along the lines of a modern-day PT Barnum. However, when the artist dies and is no longer around to do all the PR will the prices crumble and fall? In five hundred years’ time will Saatchi’s collection of barnacle-encrusted Hirsts, be found at the bottom of the sea (all barnacle encrusted), after being unceremoniously dumped as kitsch and gaudy tat from a bygone age? Or will we still be buying Hirsts like we are happy to fork out £341m for even a suspect Leonardo da Vinci? 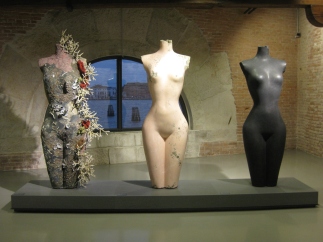 I suppose there is a difference though as we’re fairly sure that Leo would have slapped the paint on himself. Hirst doesn’t make these pieces by hand, he has workshops and specialists that do all that. Still this has been going on for years, Warhol had a factory, Rodin didn’t cast his bronzes and even Rubens only painted in the faces. What you are paying for is the idea, and of course whether you think it will stand the test of time and make you a profit.

And now to the question ‘Is it Art?’ The usual answer is ‘well if the artist says it is art, then it is art’. Although it depends on how you define what or who an artist is. If I decide to be an artist for a day and spend the next twenty-four hours pissing into milk bottles and declare it as art, would anybody notice it? No, probably not. Although the milkman might have something to say when he collects the (not so) empties.

I go to the Venice Biennale regularly, indeed this was my fifth visit. It is the oldest art festival in the world and most countries take part. I have to say that, this year, showstoppers were definitely thin on the ground. The Hirst exhibition wasn’t technically part of the Biennale, however he probably knew the Bienniale was going to be a bit of a duffer this time round and hence he rolled into town with his brand new circus and stole the show. Despite some disparaging reviews I quite enjoyed it. It had wit, it had pizzazz and it had bare breasts and knobs in abundance. It also had the underlying theme of biting the hand that feeds Damien i.e. taking the mick out of wealthy art collectors.

Is it art though? Damien says it is.

p.s. Damien, do I get a prize for being the only one to spot the ‘Taking the Mickey’ theme to the pictured sculpture, if so do I get a prize from the exhibition? I’d like the gold gimp mask please. Purely artistic interest you understand.