*The text in italics was written ten years after my first visits to Barcelona….

The best way to do Barcelona, or anywhere for that matter, is to get someone else to pay for it. This usually means getting a job with global travel prospects and a company credit card. I’ve been to Barcelona twice under such favourable circumstances. Unfortunately the second time was not so good, as the big boss from America turned up. He was a serious fellow with no desire to enjoy himself at the company’s expense, and he was even less inclined to let anybody else do so.

*Sadly he was even less inclined to see me have a good time than I first thought. My globe-trotting at that company’s expense came to an end soon after he rumbled me on that trip. In hindsight it wasn’t a great idea to vomit up two bottles of Rioja all over his shoes.

So, if you’ve got somebody else’s money to fritter, then Barcelona can be a wonderful place. La Rambla, the tree-lined avenue that runs from the city centre down to the beach makes for an interesting evening. You’ll be harangued by numerous Catalans trying to sell you postcards, flowers, birds, sisters etc. If you’ve reached the point where sisters are on offer, then you’ve gone too far down La Rambla and entered the red-light area. It’s quite safe though, and the entrance fee to the naughty cabarets is fairly cheap. It comes as quite a revelation to see what can be done with a banana.

In the red light area the prostitutes that beckon you from darkened doorways are quite harmless. Although they’ve probably all seen better days and can only muster three teeth between them.

*It is only one tooth these days. They pass it around when something needs chewing.

The only thing to be wary of are the hustlers who will claim to be porters at your hotel, fellow tourists or cousins of your mother. They then try to drag you to a backstreet bar where there will be young ladies that promise you a good time for only a few Euros. What they really mean is that the ladies will take your money and then the big ape of a doorman will then take you out the back for a good kicking.

*It appears the more glamorous retail end of the scam has now been dispensed with, these days the hustler just takes you round the corner and straight to the big ape. 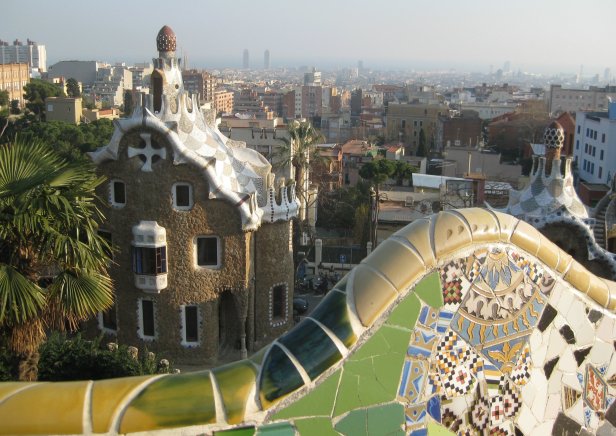 The city is also cluttered with buildings by nutcase architect Antoni Gaudi. These fantastic creations are amazing, especially when you consider that they were designed well over a hundred years ago. All I can think is that they had much stronger drugs back then. Gaudi was killed when he nonchalantly wandered out in front of a tram. Say no more.

*I was nearly twatted by a tram myself in Barcelona, when one of them jumped a red light. I now take back any previous implication that Gaudi was on drugs when he was killed. I think you can totally blame Gaudi’s flattening on the twitchy accelerator pedals of the Entitat Metropolitana del Transport.

Barcelona also boasts the largest football stadium in Europe, The Camp Nou, which is the home of FC Barcelona. It’s worth a visit just to see the FC Barcelona trophy cabinet. I use the word ‘cabinet’ loosely as it is the size of an aircraft-hanger. It is full of shiny silverware, the like of which you’d only ever see in a gypsy’s caravan. Just turn up at the Camp Nou and for a few cents they’ll give you a guided tour of the ground.

*Sadly FC Barcelona, like the UK’s thieving Premier League clubs, have discovered the joys of robbing fans. The’ guided tour’ is now dressed up as the ‘Camp Nou Experience’ and costs 22 Euros for adults and 16.50 Euros for children. However their website does say that a ‘large family’ can get in for 16.50 Euros but you do need to present documentation. I would have thought that just presenting the ‘large family’ would have been proof enough, unless they want blood tests of your paternity.

For my other travel guides to Spain click here.