Naples is a very bad girl. She’ll make your nostrils twitch at her odour of rotting garbage, your eyes will widen with terror as you dodge around the worst drivers in the world and you’ll hear your own heart beating as she takes you by the hand and leads you past the sleeping, sweating underbelly of organised crime.

Should you be lucky enough to cross Naples without any contact with organised crime you should also be aware that Naples has a fine tradition of disorganised crime too. So watch your wallet.

Her troubles go back to the war. Naples got well and truly ravaged by the Nazis and then by the Allies. Up until then she’d been a bit of an innocent country girl. She’d probably got a bit flirty after a few glasses of vino rosso but she stayed virgo intacto. However, when the queue of conquering forces had finished with her she was left up to her pits in sin and syphilis. Even the Fires of Hell wanted to join in because, just as everyone was ready to call it a day on the war, Vesuvius erupted in 1944.

Incidentally, this was the last time it did erupt.

Naples sits astride a festering lake of high pressure molten lava so, having been sixty years since the last outpouring, it is only a matter of time before the whole lot goes up again.

Bad girl though she may be, you’ll find that dancing with a she-devil does carry a certain frisson of excitement. If you accept that Naples is not going to be in the same league as more high-class totty like Rome, Venice or Florence then it is still possible to have some fun with her. However, you wouldn’t take her home to meet your mother. 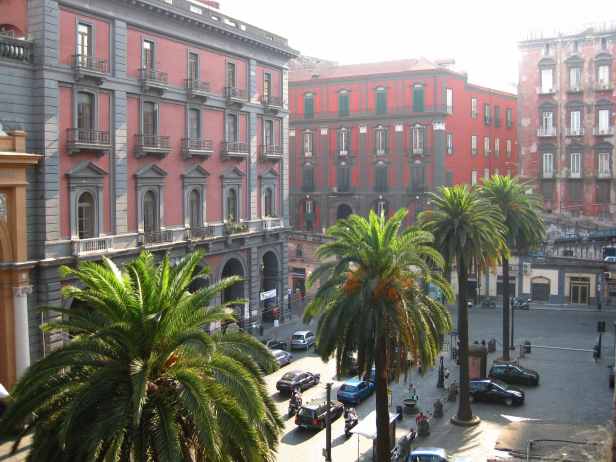 Naples has a large handful of things to recommend it. There’s Pompeii, where there’s nothing else on this planet to compare and if it isn’t on your list of places to see before you die then it jolly well should be. If Vesuvius does go off with a big bang then it may well get covered again, so I wouldn’t hang around before you go there. Then there’s Vesuvius itself, mainland Europe’s only active volcano, which will hopefully continue its period of inactivity long enough for you to stick your head tentatively over her gaping crater once you’ve climbed to the summit.

Also on your list of things to gawp at should be Old Naples. If you walk from the central station to the National Archaeological Museum, rather than take your life in your hands in a taxi, then you’ll go through Old Naples. Here you’ll find narrow little cobbled streets with washing lines strung across them, so watch out for drips falling from someone’s stained grundies. You’ll also see toothless old crones sitting talking to themselves in doorways and you’ll see little shrines at every street corner, which are presumably used for praying for false teeth.

You should also take a look at the Solfatara, which is a volcanic crater right in the middle of Naples. This particular volcano only erupts every couple of thousand years, so the odds are in your favour of not being incinerated. You can pay a few Euros to go wandering across the crust of the crater to look at bubbling mud pools and vents that blast out sulfurous gases. Although I’ve got one of those closer to home.

And then finally there’s what Naples is really famous for….pizza. You will never have tasted anything like it. Go to one of the famous pizza restaurants and try something simple like a seven-Euro Margharita with Buffalo Mozzarella. You’ll never again order an overpriced imitation of the real thing from Pizza Slut or Pizza Depress. Although the ones in Naples don’t come with a hotdog stuffed crust. I did ask, before being ejected.